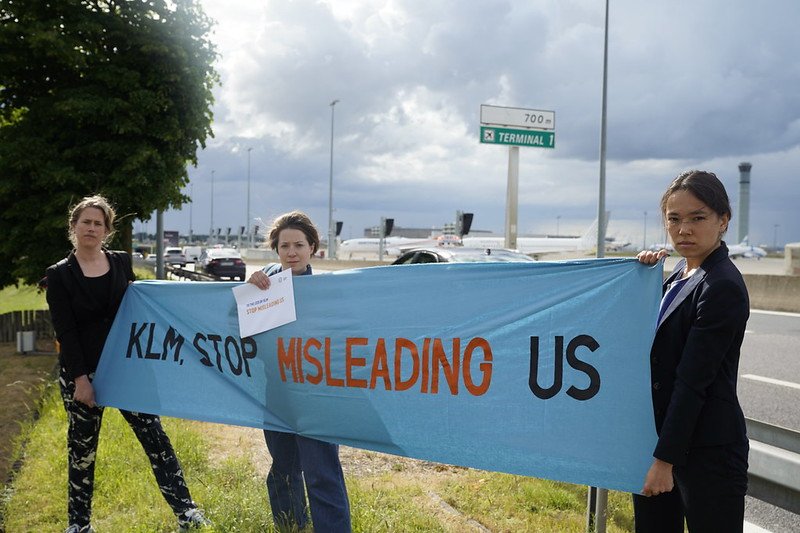 By JJ 29 May 2022 No Comments
Fossielvrij NL campaigners, who say the Dutch airline KLM’s advertisements on sustainably flying are misleading, are shown. Photo by Denis Meyer/Fossielvrij NL/Flickr

May 24 (UPI) — Environmental groups have brought legal action against KLM, alleging the Dutch airline has falsely claimed to be sustainable in advertising to improve its image, which is greenwashing.

The lawsuit represents the world’s first lawsuit against misleading aviation sustainability claims, according to the campaign group’s statement.

“There is no such thing as sustainable flying,” Fossielvrij NL campaigner Hiske Arts said in the statement. “Flying is one of the fastest ways to heat the earth, and the solutions KLM offers are unable to prevent this. KLM’s marketing misleads travelers and distracts from the urgent need to reduce air traffic.”

The campaign group added that KLM’s growth plans conflict with the Intergovernmental Panel on Climate Change’s finding that all sectors must reduce emissions to limit global warming to 1.5 degrees Celsius, which is the preferred goal under the Paris Agreement on climate change.

“Just as the fossil fuel industry is using greenwashing to protect their license to operate, the aviation sector is using misleading advertising to protect its license to grow,” ClientEarth attorney Johnny White told CNBC.

CNBC noted that KLM was not immediately available for comment.

Fossielvrij campaigner Marianna van der Stel handed KLM a letter of notification of the lawsuit at the AirFrance-KLM shareholder’s meeting in Paris, the campaigner’s statement noted.

Since then, KLM has made some limited adjustments, but continues to pursue a similar marketing campaign, according to the campaign group.